It all started in summer 2003, I had been doing a job that I really disliked and wanted a change. I had been asking the Lord to open door for a new job within the public sector as I was tired of working in the private sector. To God be the glory my prayer was answered in April 2003 and I landed a trainee post in the revenue dept of a local council and I was to start on the 22nd of June 2003.

Suddenly I noticed that my period was heavier than usual and lasted over 2wks and I get this excruciating pain in my lower abdomen that lingered on for over 30mins a time. I tried to obtain an appointment with my GP but none was available and by July 2003, I started seeing large clots of blood during my period and not only that it also lasted the whole month.

I started my new post and was coping with the heavy blood clot day in day out until one day when I was attending an open day at my new place of work, I waited to pick up a drink and I noticed my trouser was soak with blood even though I had a sanitary towel on, the chair I was sitting on was soaked too but thank God, it was a burgundy cloth chair. I managed to sneak out to the toilet to clean up. I missed the rest of the open day because I had to stay in the toilet to wash and dry my trouser. When I got back into the conference room, I placed newspapers on the seat so that it will absorb the blood on the chair. I was so embarrassed and I had to wait for everyone to leave the room in order to take the soiled newspaper with me.

I eventually got an appointment with my GP in October 2003 and he said it was just blood spotting and nothing serious. I disagreed with him because my period has become none stop since July 03 but he would not refer me to see a specialist as I have moved from the district area.

I had moved to another address in November 2000 within the same local authority and unaware that my current GP jurisdiction does not cover my new address. The doctor told me he was not going to do anything for me and I need to register with another surgery in the new area I moved to 3yrs ago but he prescribed me a tablet that will stop my period completely without any explanation.

Mind made up to find a solution

I did not collect the prescription but immediately started looking to register with another surgery because I knew it was something serious and I called myself a woman with the issue of blood. I could identify with the lady in the bible: Matthew 9 v 20 – …..a woman who had been subject to bleeding for 12 years.

I was able to register with another GP in January 2004 and I booked an appointment to see my primary doctor. By this time, I was used to regular clot discharge and I used a minimum of 10 sanitary towels a day. I was unable to do the things I used to do before and could not even wear trousers anymore.

I noticed my energy level dropped rapidly and unable to walk even to the bus stop. I used to walk at least 4 bus stops a day however I started to struggle to do the simplest task without being out of breath. Amidst all these, I had registered to sit two of my professional paper in June 2004 and I attended my classes twice a week.

One afternoon, I was in one of my lectures but could not concentrate nor absorb simple financial accounting task during the lecture. You see, I have a degree in Accounting and I am no stranger to preparing a profit and loss account but unable to carry out the simplest task in the lecture and I was completed exhausted and sleepy.

I asked the lecturer if I could go home, as I was not feeling very well. On my way home, I called my GP to book an urgent appointment and I also called my parent to discuss my current state of health. The doctor agreed I needed to see a gynaecologist as soon as possible so that they can find the root of the problem. He drafted the referral letter right in front of me and sent it off.

During this period, I noticed that I suffered very acute pain in the space of 30 minutes or thereabout every now and again. Whenever I was taken to the emergency dept I would often be given oral morphine as that was the quickest way of ridding the pain.

The Lord gave me a song to deal with the pain:

Kept by the power of God

Some time later, I was at work and the pain started again and whenever this pain ends, it is subsequently followed by at least 2-3 pints of blood clot discharge.

The pain was stronger this time and I was on my own and wanted to try to get to the toilet when I felt like I was going to faint, so I called one of my girlfriend at work for help but was unable to stand up, in the midst of these, I was more worried about the clot discharging on the office floor. I eventually managed to get myself to the toilet and the next thing I know, the ambulance was called. I refused to go with the ambulance because it will not take me to UCH another hospital. My deputy manager and a friend at work took me from Middlesex to UCH Euston.

I was wheeled into the A&E, I was quickly put on a bed in the cubicle and once the doctor saw me, there was a commotion abs all I was hearing the doctor saying was ‘somebody get me a drip and let have a blood match done here pronto”.

Apparently the constant loose of blood has reduce my body HB to 3.2 of which the standard level for a female is 12. It occurred to me that I had been flying on God’s wings.

To have been going around with only one-third of the required blood can only be a miracle. I was given 5 units of blood and the A&E specialist instantly referred me to a gynaecologist. When I saw the gynaecologist I was diagnosed with having Fibroids

I was told I had about 10 or more fibroids with mainly ones in the lining of the womb – submucosa and those within the muscle of the womb – intramural.

I was referred from one gynaecologist to the other and was then placed on hormonal injection – Zoladex to induce artificial menopause in order to prepare me for surgery, I was also given transamic acid too. I will not delve into the side effects of this drug other than to testify that God saw me through.

Getting on with my life

In the midts of all this I was planning to get married and had to travel to Nigeria for my engagement. While in Nigeria I had the intermittent pain and loss of blood and decided it was time to confront my fiancé about my circumstances.

I told him the issue I had been facing and the potential consequences of it, both of us being Christians we prayed about it. However I insisted that he thought about whether he wanted to go ahead with the engagement and he was supportive and decided to go ahead.

I subsequently got married and 2 months after my wedding had my first procedure submucosal resection and continued on the course Zoladex etc.  On my second procedure the surgery had to be aborted due to developing high blood pressure. Six months later I had the third surgery and we later visited the doctor to review the case only to find out that more had developed!!!

I knew delay does not mean denial – my time of testimony will come.

The ultimate battle – with God on my side

As a result we decided to go with an open surgery – key hole myomectomy and laparascopy. We were told what the risks were. So I listed all the risks and pasted them on my wardrobe in our room, and every morning I will lay hands on these and declared they were not my portion. Instead I claimed total healing and Godly wisdom for the specialist.

In January 2006 I had the surgery and a review in March showed that all the fibroids had been taken out. Miraculously by the end of March unknowing to me I had taken in with a baby. And to God be the glory I had an uneventful pregnancy. The book ‘Supernatural childbirth’ by Jackie Mize was very helpful for building my faith and to God be the glory at the end of the year 2006 – I gave birth to a beautiful baby.

This is indeed the long walk of battle and delays and pains – however I knew my Redeemer liveth and he kept me to this time to testify. 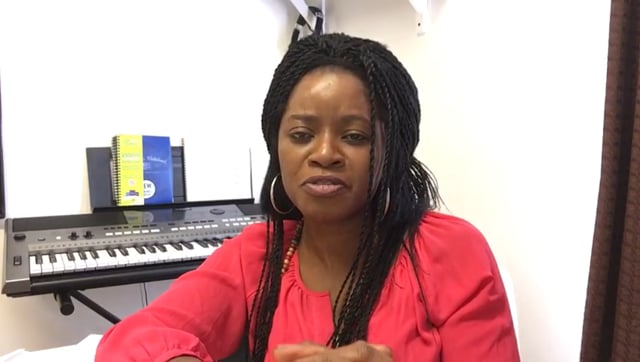 So whether you eat or drink or whatever you do, do it all for the glory of God.
1 Corinthians 10:31